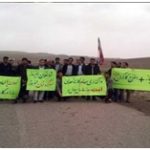 Seventeen workers from Agh Dareh gold mine in Iran were publicly flogged in May, while a prominent jailed union activist has embarked on a hunger strike.

Workers at the gold mine in the northwestern city of Tikaab were flogged after protesting against the firing of 350 of their colleagues. They each received between 30 and 99 lashes. Their employer filed a complaint against them for the protest action, and the sentence was carried out by the security services.

A further nine workers at the Bafgh iron ore mine were sentenced to be flogged for taking part in protest action in 2014.

The flogging comes as part of an increased crackdown on union activists. Due to the repression of independent trade unions, IndustriALL has no affiliates in the country, but is supporting the emergence of free trade unions.

In November last year, Jafar Azimzadeh, a welder and leader of the Free Union of Iranian Workers, was jailed for six years for his union activities after organizing a petition signed by 40,000 workers. He was found guilt of “endangering national security”.

Mr Azimzadeh was elected as a workers’ representative to the 105th International Labour Conference (ILC) in Geneva in June 2016, but was unable to attend due to his imprisonment, although representatives from state-controlled unions were able to attend.

He embarked on a hunger strike on 29 April 2016 in protest at the repression of Iranian workers. There are serious concerns about his health.

A number of other labour activists, including Reza Shahab, the leader of Tehran bus drivers’ union VAHED, are in prison, and others have been summoned to the Revolutionary Court, used to try cases of sedition.

After negotiations about its nuclear programme, Iran signed the Joint Comprehensive Plan of Action, also know as the nuclear deal. The result is the lifting of sanctions and the influx of foreign capital into Iran. The process has been destabilizing, and recently the historic home appliance manufacturing company Arj went bankrupt, with the loss of many jobs.

After a recent visit to the country by representatives of the International Monetary Fund, Iranian unions believe that the heightened repression is intended to create a more compliant workforce for foreign investors.

In a statement released by the Union of the Metalworkers and Mechanics of Iran during the ILC, the union said:

“The lashes of the International Monetary Fund are hitting the backs of the workers and our manufacturing industry.”

“IndustriALL Global Union condemns in the strongest terms the brutal flogging of 17 Agh Dareh Gold Mine workers in May 2016. The mineworkers were exercising their legitimate right to protest against layoffs and were demanding job security.

“A further nine Bafgh Mining Company workers in Yazd Province have also been sentenced to imprisonment and tens of lashes in recent days. Such inhuman sentences against protesting workers are a gross violation of internationally recognized human rights and labour rights conventions .

“Therefore, it is imperative that the Government of Iran intervene immediately to end gross violations of human rights and trade unions rights, including flogging of mineworkers, at the Agh Dareh Gold Mine, and the Bafgh Mining Company.