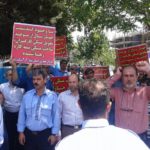 IndustriALL Global Union has written to the President of Iran, Hassan Rouhani, demanding an end to the repression of trade unionists, and calling for the release of Reza Shahabi and Esmail Abdi.

The Union of Metalworkers and Mechanics of Iran (UMMI), an IndustriALL affiliate, has issued a solidarity call for the release of trade union activists Reza Shahabi and Esmail Abdi, and an end to the repression of trade unions.

IndustriALL urges its affiliates and supporters to support the call. Sign the LabourStart petition or send your own letter, and help raise awareness of the situation in Iran. Foreign investment is flowing into the country in the wake of the nuclear deal, but the country is not honouring basic labour rights.

“IndustriALL Global Union once again urges the Government of Iran to ratify ILO Convention 87 on Freedom of Association and Protection of the Right to Organize, and Convention 98 on the Right to organize and Collective Bargaining. This is a clear call to your administration to guarantee the rights of workers to join unions and to enjoy the protection of collective bargaining.

“We expect that your administration will act promptly to foster an environment conducive to the full promotion and respect of trade unions rights.”

Reza Shahabi is the treasurer of the Syndicate of Workers of Tehran and Suburbs Bus Company. In prison for trade union activity on political charges since 2010 – for “colluding against the security services” and “spreading propaganda” – he was under medical leave of absence after suffering severe forms of ill treatment while in detention.

He has been denied an extension to his medical leave and is now back in prison. His detention was extended by 968 days as a result of his absence. Shahabi joined a hunger strike on 9 August.

Esmail Abdi is a leader of the Tehran Teacher Trade Association. He is serving a six years sentence on false charges. After 38 days on hunger strike, he was transferred to hospital, only to be returned to Evin Prison two days later.

There have been unprecedented restrictions on workers’ unions this year: in April, Maziar Gilani-Nejad, a member of UMMI, was summoned to the Revolutionary Court. He was subsequently acquitted.

Shapour Ehsani Rad, a member of the Free Trade Union of Iran Workers, was sentenced to imprisonment and lashing.

Bail providers for Ja’far Azimzadeh of the Free Trade Union of Iran, and Mahmoud Beheshti Langroudi of the Iranian Teachers Trade Association, have been under pressure in order to force these trade unionists to return to prison.

Hamid Sharghi, another member UMMI, is on bail awaiting his trial. Ali Akbar Baghani, a member of Tehran Teachers Trade Association, is in exile. Ebrahim Madadi and Daoud Razavi, members of the Syndicate of Workers of Tehran Bus Company, have been issued with arrest warrants.

In a statement, UMMI said:

“We demand compliance with the law and the release of all prisoners of conscience and labour movement and we emphasize that the responsibility for the well being of the trade unionists remains with the authorities issuing such sentences.

“Threats, arrests, and even violent treatment cannot keep us from the way we have chosen. We steadfastly defend our principles and will do our utmost to realize our demands for the release of our comrades.

“Hardship, danger, death, victory and setback are all natural and possible, however there won’t be any retreat from the workers’ ideals.”