Priorities for trade unions in Iran

August 26, 2019 Felezkar News Comments Off on Priorities for trade unions in Iran

In a wide-ranging interview, Maziyar Guilaninejhad, Coordinator of the Union of Metalworkers and Mechanics in Iran (UMMI), assesses the current situation for trade unionists.

IT: Could you give us a short description of the present conditions of independent workers organisations and trade unions in Iran?

MG: According to Article 26 of Iran’s Constitution, and based on the ILO Conventions 87 and 98, these organisations are legal entities. However, the government in Iran refuses to recognise independent trade unions. They are prevented from having offices, bank accounts, assemblies to elect board of members or protest rallies. They do not have the right to represent workers in collective agreements, monitor health and safety conditions or go on strike. Although a member of the ILO, Iran does not implement its key conventions.

IT: What part of Iran’s economy is covered by the Metalworkers and Mechanics Union and does it have any working relationship with international trade unions or organisations?

MG:UMMI was formed in the 1944. It was registered in 1960 under Iranian law. Unfortunately, its operation was forcibly curtailed following the persecution of trade unions in 1981. A new wave of demands for the reactivation of trade unions, and formation of new ones, took place throughout the country starting in 2001, with our union eventually resuming its activities in 2005. Our union covers plants in fields such as the automotive, mining, copper, iron, steel, oil and gas industries, is a member of the IndustriALL Global Union and has fraternal relations with the Confederation of Progressive Trade Unions of Turkey (DISK) and the National Union of Metalworkers in Turkey. Our bilingual website at sfelezkar.com covers our views and activities. 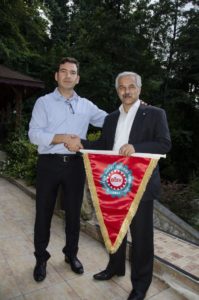 IT: Organisations linked with the Iranian government, such as the Workers’ House and the Islamic Labour Councils, regularly participate in international meetings, as part of the government-approved official delegation. Do these government organisations make any contribution to solving the problems of the working people of Iran?

MG:The government-affiliated workers’ organisations have been attending ILO conferences every year, but they have not been addressing the problems of Iranian workers and have been unable to implement ILO Conventions 87 and 98. For this reason, they have not had much influence on labour and workers issues and have thus been criticised by the unions. As these so-called representatives are selected by the Ministry of Labour, they have no links with the unions. While the representatives of these organisations are present in the Parliament, the resources of the National Welfare Fund Organisation, that supposedly belongs to the workers, are being plundered by the government who refuses to pay its debt to the workers. They have also been unable to stop the pillage to date and prevent the Welfare Organisation from going into bankruptcy.

IT: We have seen protests and strike action amongst industrial workers and government employees such as teachers in the past few years. What is your assessment of the capabilities in organising strikes to fulfill the workers’ demands?

MG:As a result of the anti-labour policies, which stem from the implementation of directives from the IMF that undermine the livelihood and welfare of teachers, workers and their families, the strike process will no doubt accelerate. During the past three years, protests have significantly increased both quantitatively and qualitatively, so much so that both workers and the teachers managed to take the protests to the streets and draw in the people. This method of strike and protest started from the HEPCO and AzarAb factories and was later used by workers at the Haft Tappeh Sugar Cane mill and [INSIG] Steel plant in Ahvaz. In other cases, this style of protest was unsuccessful due to the non-existence of a workers union, strike committee, strike fund or lack of solidarity from workers in other factories.

IT: What is your assessment of the strikes at Haft Tappeh, Ahvaz Steel, HEPCO Arak and AzarAb over the past two years?

MG:The workers’ strikes in these plants were for overdue wages and against the privatisation that would cause their closure. Workers demanded that ownership be returned to the state and late wages paid. Today, the main demand of the working class in Iran is prompt payment of their wages, abolition of privatisation and cancellation of temporary employment contracts. The outcome of these strikes was to expose the ugly face of privatisation and IMF policies and to expose the illegitimacy of the privatisation processes, thereby succeeding in forcing the government to halt a number of them. The new owner of Pars Tire Company [in Saveh] who could not sack any of the employees, tried to change the titles of workers posts so that they could be laid off. The new owner is now facing workers protests which have our support. The strength of this protest included: the publicising of the demands at community level, the unity between workers and the support from workers’ families. Weaknesses included the absence of a knowledgeable organised structure to lead the strikes, lack of negotiation skills in presenting the workers’ demands and inaccurate slogans such as the demand for “Management Councils” to run factories with no regard to the actual balance of power.

IT: Until recently, some commentators and Western politicians welcomed the election of President Hassan Rouhani in 2013 and 2017 and his major economic plans. Would you, see these plans positively with specific regards to workers’ and employees’ welfare?

MG:Workers want to know what each candidate can provide for them and that their life and welfare will be improved. The UMMI announced that implementing the directives of the IMF and WTO would lead to attacks on public services and the destruction of industries, jobs and community security by investment brokers operating within the government. Numerous cases of “privatisation”, embezzlement of workers savings in the Social Security Fund, staggering amounts of imports, widespread brokering and money laundering have resulted in the destruction of more than 40% of industry and more than 5 million unemployed. How do you think a typical Iranian worker on a monthly income of $126 feels? Last year, this figure stood at $256 and the 50% reduction in purchasing power has made many multimillionaire middlemen. The average income of the working class of Iran is a fifth of the poverty line income. Many workers have removed health, education, suitable housing and even meat and fruit from their affordability’s.

MG:These sanctions are a silent war against the health and livelihood of workers. They allow the Iranian extremist and militant factions to step up pressure on labour unions and civil activists. Global capitalism employs a double-edged razor policy. On the one hand, they keep the country dependent on their overpriced goods using middlemen to plunder our foreign reserves. And on the other, they quash the freedom and equality movement through hardliners as well as by promoting and supporting extremists and neoliberals. How can a government that has auctioned off public resources to cut back on health, education and housing subsidies mitigate the impact of the sanctions? The cut back in services allows the embezzlers and the financial mafia to loot foreign exchange resources and increase commodity prices creating a suitable environment to spread corruption and embezzlement. Iran’s “merchant capitalism” seeks to shut down industries and increase unemployment. The closure of factories and rising housing and food prices will lead to riots that only weaken the trade union movement and liberation movements. Many young Iranian workers and professionals are forced to migrate away from their families to earn a low income living under difficult immigration and employment conditions in other countries.

IT: What can trade unions do in solidarity, in order to provide assistance to expand and consolidate trade union activities in Iran?

MG:The most important arena is the struggle for peace and prevention of war.  Then there is the lifting of illegal economic sanctions, the raising of wages for Iranian workers to levels that meet their living requirements, improving working conditions, implementation of ILO conventions and the release of imprisoned trade unionists. We call on trade unions around the world to support this struggle by any possible means, to oppose US policy on invasion and economic pressure on Iran and in particular to force their governments not to join the embargo on medicine and food for Iranian people. An effective international campaign is vital for trade union freedoms and the protection of rights and democratic freedoms. More than 30 people who took part in the May Day celebration this year were arrested, with four in prison and the rest on bail. Leaders of the teachers’ union are also in prison. Members of our trade union in Assaluyeh were arrested while demonstrating peacefully in July 2018, to demand payment of their late wages. They were sentenced to two years’ suspended imprisonment. 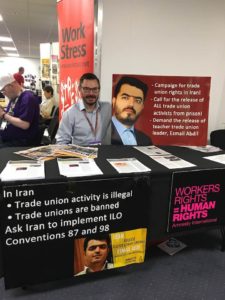