October 24, 2019 Felezkar News Comments Off on IndustriALL demands release of 21 workers in Iran 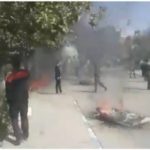 IndustriALL Global Union has written to the president of Iran to demand the release of 21 workers detained after protesting at Azarab Industries in Arak, and condemned the brutal use of force against peaceful protestors at the company’s factory.

Azarab workers, who have been on strike since 6 October, were viciously beaten in an attack by riot police on 20 October. Several people were injured and taken to hospital but have reportedly discharged themselves for fear of being arrested.

Workers are demanding payment of overdue wages and a return to state-ownership of the industrial manufacturing company that constructs power and petrochemical plants.

Workers say Azarab Industries was illegally sold to current owner Mr Qaleh-bani, who is ignorant of labour issues and has neglected to pay workers.

On 21 October, Arak prosecutor, Abbas Qassemi, reportedly confirmed the arrest and detention of 21 workers. Meanwhile, the security situation in Arak is tense and the demands of the workers have not yet been met.

“It is extremely worrisome that exactly one month after sending you another letter deploring the brutal attacks on HEPCO workers, who were also exercising their legal right to peaceful protest, we are forced to contact you again to call attention to the brutal attack by security forces against peaceful Azarab workers in Arak,”

“IndustriALL Global Union urges the Iranian government to abide by national and international core labour standards, and in consequence, put an end to the repression of workers exercising their legitimate right to demonstrate peacefully in public, and release immediately all the Azarab workers detained in Arak on 20 and 21 October.”

Maziyar Gilaninejhad, spokesperson for the Union of Metalworkers and Mechanics of Iran (UMMI), called for the return of manufacturing and industrial plants to the public sector, and urged the government to cancel the privatization of Azarab Industries. He added:

“The government must commit Azarab Industries to pay all overdue wages and salaries as soon as possible. We demand that the police should not interfere in labour-related issues or in workers’ legitimate strikes and protests.”

Gilaninejhad called for the Minister of Labour to defend the rights of workers in accordance with the provisions of the Constitution and the labour law, and intervene in labour disputes before they reached crisis point.