IndustriALL stands in solidarity with the people of Iran

December 7, 2019 Felezkar News Comments Off on IndustriALL stands in solidarity with the people of Iran 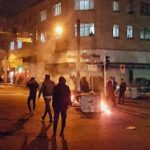 The brutal suppression of protests in Iran has led to at least 250 deaths and 3,700 injuries, and at least 7,000 protesters have been arrested.

The protests started on 15 November, after the government tripled the fuel price overnight. What began as an economic protest soon turned into a broader series of protests against government corruption and mismanagement.

The government responded with brutal repression, shooting and beating protesters. Many of those killed were young people, who were allegedly shot by snipers. Protesters subsequently erected road blocks and barricades, and burnt banks, government buildings and other symbols of the regime. President Hassan Rouhani blamed the US and other foreign elements for organizing the protests.

The Iranian regime blocked the Internet from 16-27 November, making it is difficult to get accurate information. Due to the internet shutdown, IndustriALL was unable to make contact with its Iranian affiliate Union of Metalworkers and Mechanics of Iran (UMMI). The internet was restored on Wednesday this week.

IndustriALL expresses solidarity with the Iranian people in this dark period of repression, and supports them in their struggle for peace, human and democratic rights, and social and economic justice.

IndustriALL calls on the Iranian government to: