Happy May Day, the International Day of Workers’ Solidarity!

May 1, 2021 Felezkar News Comments Off on Happy May Day, the International Day of Workers’ Solidarity! 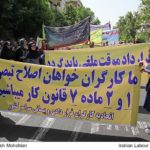 The current [Iranian] year 1400 coincides with the 100th anniversary of the inauguration of International Workers’ Day in our country. The first gathering of International Workers’ Day in Iran was held on the initiative of the Central Union of Workers of Iran in 1921. Despite the limited size of the Iranian working class, 8,000 workers as well as administrative personnel were organized in 16 trade unions in that year. They planned and organized the first May 1st celebration in Iran.

Today, we welcome the celebration of the May Day at a time when the unity and solidarity of the working people in the realm of action is becoming more and more, and the working people have realized this need more than in previous years.

The united action of 45,000 project workers and their 40-day nationwide strike in August 2020 led the project’s workers to realize that “If we don’t work, no one else can move this wheel.”

The understanding and urgency of the unison of retirees across the country, whose protests shake the country every week and has frightened the mafia camped in the Social Security Organization, has a crystal clear message: “We want our right and we do not allow deception and wiping out of our savings.”

This alliance has challenged the IMF’s policies that wants working people to be capitalist’s slaves. Exposing the detriments of privatization through neoliberal policies that shut down HEPCO, ARJ, Machine Sazi Tabriz (Tabriz machine tool manufacturing factory) … has brought the workers of Azarab, Foolad, HEPCO, and Haft Tappeh to the streets in recent years, and has forced the government to bring privatizations in a devious manner to the workers’ land. But the vigilance of the workers will undoubtedly defeat this deceitful act too.

The workers, in harmony with heroic nurses and medical staff, demand immediate coverage of vaccination, free and public health services suitable to protect people’s health and, above of all, the abolition of commercialization and privatization of health and social security, and the immediate payment of wages and benefits and bonuses matching the efforts of these dear fellow workers.

The message of the working people in this (Iranian) year 1400 is unity and solidarity against privatization and unemployment of workers and the destruction of industry. The roaring waves of “bread and trade union” have reached an unprecedented peak since last year, and the fervent presence of hardworking women in protests has become more eye-catching than in previous years.

On May Day, the global celebration of working people, we call for the immediate release of the writer, lawyer, civil activist sisters and brothers, and especially Esmail Geraami and Esmail Abdi. Repression and censorship cannot prevent working people from coming to the streets. The dividing the workers, this typical technique of capitalism, will not succeed.